You are here Home » Fatima Film » Behind the Scenes

Fatima Film Behind the Scenes

An Interview with Ian and Dominic Higgins; if you would like more information then contact us direct or Buy the DVD online today:

How important was research to this project?

Ian: The 13th Day is a dramatization of actual events and most of the characters that appear in the film actually existed, so research was crucial from that point of view and from day one, everyone on the team was committed to realizing this film in such a way that it kept as true to the actual events as possible. As filmmakers we’re also very big believers in the value of research as inspiration too. We’ve found so many great ideas for a scene, hiding away in the pages of an old book while researching the script. It’s like digging for gold, there are so many fantastic nuggets of information buried away, just waiting to be re-discovered, it’s a really exciting part of the process.

Dominic: Yes, research was the key to every element on this film , in fact, it was during our initial research trip to Fatima that we decided most of the exterior locations had to be filmed there, there is uniqueness to the place that goes beyond the rugged topography of the landscape and we wanted to capture that feeling, that atmosphere on camera. Ian: Thanks to trips such as this, we were also able to bring back plenty of video/photographic reference material for the interior scenes such as Lucia’s house which is still perfectly maintained as a living museum.

Were there problems filming at the actual locations?

Ian: Although filming on location brought many benefits, it wasn’t without its difficulties. There were language problems to overcome, working with hundreds of extras who speak a different language is no small feat; thankfully we had a great production team in place and the unfailing patience and support of the local people which helped everything run a lot smoother.

Dominic: A lot of the locations also presented sound issues such as local traffic noise and the odd farmer’s tractor to work around. In fact unwanted background noise was a continuous problem that plagued the entire production process even the interior shoots. The interior sets were built in the UK in Earlswood just outside Birmingham and right next to the M40 motorway! This meant that although some location sound was good a lot of the dialogue had to be re-recorded later in a sound studio.

The visual style of the film is quite unique and very distinctive, can you explain more on the reasons behind this and how it was achieved on such a low budget?

Ian: Our background is art and design and all our films prior to The 13th Day were self funded “experiments” – we’ve always been very visual filmmakers but when you don’t have much money you’re forced to think creatively around problems. This is how we approached all the big effects shots in the film – problems that needed a creative solution as opposed to money being thrown at them. 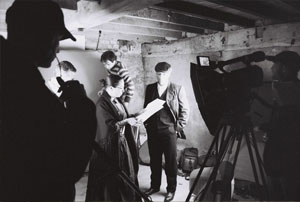 Dominic: In creating the visual style of the film we wanted to ‘paint a thousand words’ with every frame. Our approach was to look at it as painters and tell the story through the visuals and like most paintings the more you look, the more you see. We chose to shoot the majority of the film in black and white. The idea came about after reading though all the documented eyewitness accounts of the ‘miracle of the sun’. They all described seeing changing colours around them. This sparked the idea of how we needed to use colour in this film. While black and white not only helps create a sense of the period, it also conveys a particular perception of the world where so much is hidden. Only when the children are connecting to that spiritual light do we glimpse a world of colour.

Ian: We also made extensive use of “greenscreen” technology – this is where you film an actor against a green backdrop and then using special software, remove all the green in the image. You then end up with a transparent background so you can superimpose the actor into a different scene. An example of this is the shot where Mrs. Santos is praying in the church – Jane (Lesley) was filmed against a greenscreen and then added into a shot of a church interior. Dominic: Digital technology is very exciting for filmmakers such as ourselves. It’s allowed us so much creative freedom.

The sound design of the film was very important to you guys too – why is that?

Ian: Absolutely. With sound you can speak to people on a subliminal level, it’s a very powerful tool for enhancing what you see on the screen. Through music you can inspire, unnerve or move people to tears. The marriage of sound and image is what excites us the most when we set about bringing a story to life.

Dominic: We had a lot of fun working with our sound guys thinking up different ways to use sound and it was amazing to see how much of a difference all the sound effects made to a finished scene.

Read about the Music and Sound from The 13th Day