You are here Home » The Facts

Between May and October 1917, the Blessed Virgin Mary appeared to three young children, Lucia Dos Santos and her cousins Jacinta and Francisco Marto, in the fields outside their village of Aljustrel, very close to Fatima in Portugal. 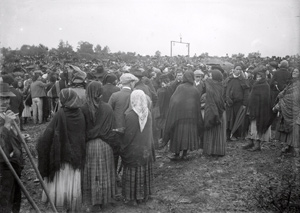 The Lady of Light “more brilliant than the sun” would come and speak to them at the same time, on the 13th day of each month for six months promising that on her last visit, she would perform a miracle for all to see, so that they would believe.

Lucia later revealed that on the Lady’s third visit, she gave the children a Secret, told in three parts in the form of prophetic visions of future events including the advent and timing of the Second World War, the spread of communism, and the assassination of the Pope.

Read more about the secret of Fatima. 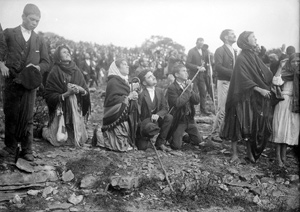 Word quickly spread that the children were experiencing spiritual encounters with a Lady from Heaven, and crowds soon descended from far and wide to the site to witness the children’s experience, some to ridicule them, others bringing pleas of heavenly intercession into their lives.

The Government at the time of the apparitions was fanatically anti-religious, and the children were put under tremendous amounts of pressure to admit that it was all a lie, including imprisonment and interrogation under the threat of death, but they refused to capitulate.

Read more about the historical context. 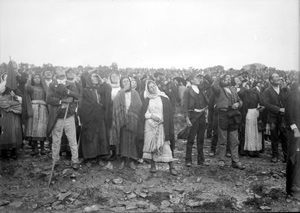 On October 13th 1917, the date of the prophesised miracle, a crowd of 70’000 people, including reporters, photographers, government officials, scientists, sceptics and believers, gathered in the field in a torrential downpour.

Thousands of independent eye-witness accounts profess that the rain stopped, the dark clouds broke and the sun ‘dimmed’ so that they could look at it directly without it blinding them, or hurting their eyes. It changed colours, bathing the crowds in rainbow shades of light and began spinning in its orbit before plummeting towards the earth….

“Then suddenly, on we heard a clamour, a cry of anguish breaking from all the people. The sun, whirling wildly, seemed all at once to loosen itself from the firmament and, blood red, advance threateningly upon the earth as if to crush us with its huge and fiery weight. The sensation during those moments was truly terrible.” Prof. Almeida Garrett. His full account may be found in “Novos Documentos de Fatima” (Loyola editions, San Paulo, 1984) 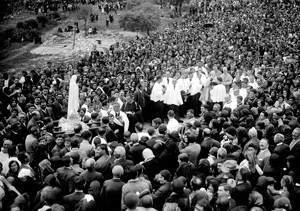 People reported that they experienced an instantaneous drying from their drenched state, to the extent that the muddy ground in which they stood became hardened.

The phenomenon lasted approximately 10 minutes and was reported by witnesses from up to 25 miles away.

The event became known as the great Solar Miracle of Fatima.