You are here Home » The Facts » The Children » Francisco Marto 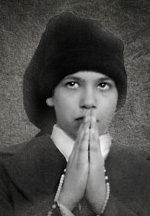 Francisco Marto was born on 11th June 1908, the sixth of seven children, in a house in the same small village as his cousin Lucia, Aljustrel.

Francisco was a kind and gentle boy, who loved games and other children. He was a peacemaker, but courageous, as his conduct under the severe questioning by the Administrator of Ourem, would later show. He could also be very mischievous. He had a love for nature, and animals in particular.

Once he gave a penny, all the money he had, to a friend for a captured bird, only to set the bird free. He played a reed pipe, to which Lucia and his sister Jacinta would sing and dance.

Francisco was initially excluded from experiencing the first encounter with the Lady from Heaven, until he satisfied her request of praying the Rosary. From then on, although he saw the Lady, her and felt her presence, Francisco never directly heard her words, or was able to verbally communicate with her. 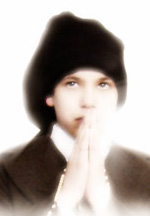 In the third apparition the children were given a Secret told through harrowing visions, including one of hell, which so changed them that they became more like adults than children. At this time the Administrator of the district, Arturo de Oliveira Santos, a Freemason, devised a scheme to discredit the apparitions by terrorizing the children. He tried to bully them into admitting they lied, threatening to boil them in oil if they withheld the Lady’s ‘secret’. He kept them in jail during the time of the fourth apparition on August 13th as a way to keep them from their appointment with the Lady. She appeared to them a few days later.

Francisco was enrolled in school but played truant as often as possible. He preferred to spend time praying to the “Hidden Jesus” in the Tabernacle. His great concern was to console his sorrowing Lord and the Heart of His Mother.

When asked what he wanted to be when he grew up, Francisco answered, “I don’t want to be anything. I want to die and go to heaven”.

In August 1918, when World War I was nearing an end, Francisco contracted influenza. He died a year later, peacefully on April 4th 1919, aged 11.

He was buried the next day in a little cemetery in Fatima, across from the parish church. His body was later translated to the Sanctuary that was built on the site of the apparitions at the Cova da Iria.